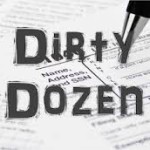 Dirty Dozen Tax Scams List: The Internal Revenue Service  issued its annual “Dirty Dozen” list of tax scams, reminding taxpayers to use caution during tax season to protect themselves against a wide range of schemes ranging from identity theft to return preparer fraud.

The Dirty Dozen listing, compiled by the IRS each year, lists a variety of common scams taxpayers can encounter at any point during the year. But many of these schemes peak during filing season as people prepare their tax returns.

“This tax season, the IRS has stepped up its efforts to protect taxpayers from a wide range of schemes, including moving aggressively to combat identity theft and refund fraud,” said IRS Acting Commissioner Steven T. Miller. “The Dirty Dozen list shows that scams come in many forms during filing season. Don’t let a scam artist steal from you or talk you into doing something you will regret later.”